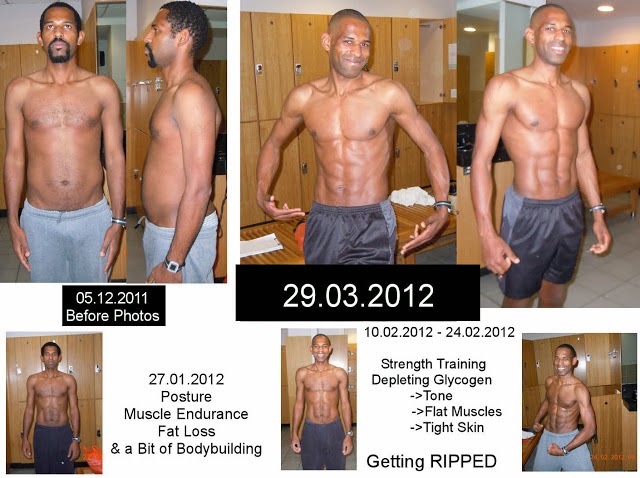 Jonathan Erskine-Nartey has been training with me for 4 months, 4 times a week in the morning and his determination has paid off big time. With a lot of dedication, we managed to get Jonathan from an average guy with dreams of a flat tummy into a serious Male Fitness Model. He will be contesting on “Miami Pro“ Fitness Modeling & Bodybuilding competition events on the 1st of April 2012 (No, it’s not an April’s fools joke) at Alban Arena, HERTS as well as the Miami Pro European Championships 2012 on 2nd & 3rd June 2012 at ExCEL, LONDON

So how did we do it? Jonathan, like many other guys, always dreamed of a nice physique, strong and toned body with a 6 pack that can show in HD. He didn’t just hope for such a physique, he actively tried a lot of stuff – purchasing lots of Fitness books & accessories, reading and following a huge amount of information / advice from the Internet, the guys next to him at the gym as well as fitness professionals, taking lots of notes as well as spending a lot of time thinking and planning all on paper. Not only he tried hard, he tried for over 6 months with little results.

We had to remove a lot of bad advice that’s been leading him in circles for over 6 months.

The idea wasn’t to get john into a big bodybuilder frame (something that can take longer), but rather to create a highly toned (firm) body, with tight skin and low body-fat percentage – a look which is quite maintainable.

As for the abs? Well… let’s just say Jonathan hasn’t done a single crunch or sit up


Well done again mate and I hope you are proud of your hard efforts and fantastic results. I know I am.


Note: This blog is copied from here
Posted by Jonathan Erskine-Nartey at 00:00